our lab will participate at Lange Nacht der Wissenschaften, an established form of public relations activity in Germany. We will present our work in form of interactive particle simulations, 3d visualizations, and a small hands-on experiment involving a laser interacting with a colloidal monolayer.

Michael Engel attended the 50 year celebration of CECAM in Lausanne, Switzerland. CECAM (Centre Européen de Calcul Atomique et Moléculaire) is the longest standing European Institute for the promotion of fundamental research on advanced computational methods and their application to problems in frontier areas of science and technology.

As the conference demonstrated, simulations are more relevant than ever due to advances in computer hardware and, even more importantly, advances in simulation algorithms. Recent trends particularly well covered in Lausanne were the topics ‘Machine Learning’ and ‘Neural Networks’. Even though being a blind follower can easily lead astray, there are huge possibilities with the right strategy.

Our joint work with Nicolas Vogel and Erdmann Spiecker advanced the understanding of the structure, defect accumulation and thermodynamics of colloidal clusters on and off magic numbers and was awarded this month’s cover for ACS Nano. Congratulations Junwei and Chrameh! 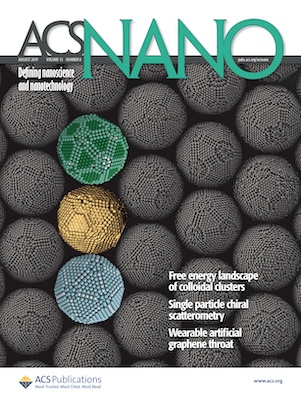 Read about it here:

Some pictures from the 2019 group hike to several caves near Muggendorf in the Franconian Switzerland.

Posted on February 6, 2019 Posted in Announcement

After two years of construction and several more years of planning, the new Interdisciplinary Center for Nanostructured Films (IZNF) is now ready for research groups. Our group moved in today!

The new lab is in the heart of the Technical Faculty of FAU next door to our experimental collaborators.

Posted on January 30, 2019 Posted in Announcement

Congratulations to Nydia Varela for the first prize in the annual MAP poster contest with a poster on effect of polydispersity on structure formation!

Posted on December 10, 2018 Posted in Publication

“Clusters in systems as diverse as metal atoms, virus proteins, noble gases, and nucleons have properties that depend sensitively on the number of constituent particles. Certain numbers are termed ‘magic’ because they grant the system with closed shells and exceptional stability. To this point, magic number clusters have been exclusively found with attractive interactions as present between atoms. Here we show that magic number clusters exist in a confined soft matter system with negligible interactions. Colloidal particles in an emulsion droplet spontaneously organize into a series of clusters with precisely defined shell structures. Crucially, free energy calculations demonstrate that colloidal clusters with magic numbers possess higher thermodynamic stability than those off magic numbers. A complex kinetic pathway is responsible for the efficiency of this system in finding its minimum free energy configuration. Targeting similar magic number states is a strategy towards unique configurations in finite self-organizing systems across the scales.”

Read about it here:

A paper involving Michael Engel with coauthors Joshua Anderson and Sharon Glotzer from University of Michigan, Masaharu Isobe from Nagoya Institute of Technology, Etienne Bernard then from Massachusetts Institute of Technology, and Werner Krauth from École Normale Supérieure has been chosen as a Milestone Paper “that made significant contributions to their field” among all articles published in the journal Physical Review E in 2013.

Several members of the lab traveled to present and promote their newest research results at conferences throughout Germany: