Clusters in systems as diverse as metal atoms, virus proteins, noble gases, and nucleons have properties that depend sensitively on the number of constituent particles. Certain numbers are termed ‘magic’ because they grant the system with closed shells and exceptional stability. To this point, magic number clusters have been exclusively found with attractive interactions as present between atoms. We showed that magic number clusters exist in a confined soft matter system with negligible interactions. Colloidal particles in an emulsion droplet spontaneously organize into a series of clusters with precisely defined shell structures. Crucially, free energy calculations demonstrated that colloidal clusters with magic numbers possess higher thermodynamic stability than those off magic numbers.

Colloids are rarely perfectly uniform but follow a distribution of sizes, shapes, and charges. This dispersity can be inherent (static) or develop and change over time (dynamic). Despite a long history of research, the conditions under which nonuniform particles crystallize and which crystal forms is still not well understood. We demonstrated that binary and even size-disperse hard sphere mixtures crystallize readily if compressed slowly enough, and they do so in surprisingly complex ways. This result was obtained by accelerating event-driven simulations with particle swap moves for static dispersity and particle resize moves for dynamic dispersity. 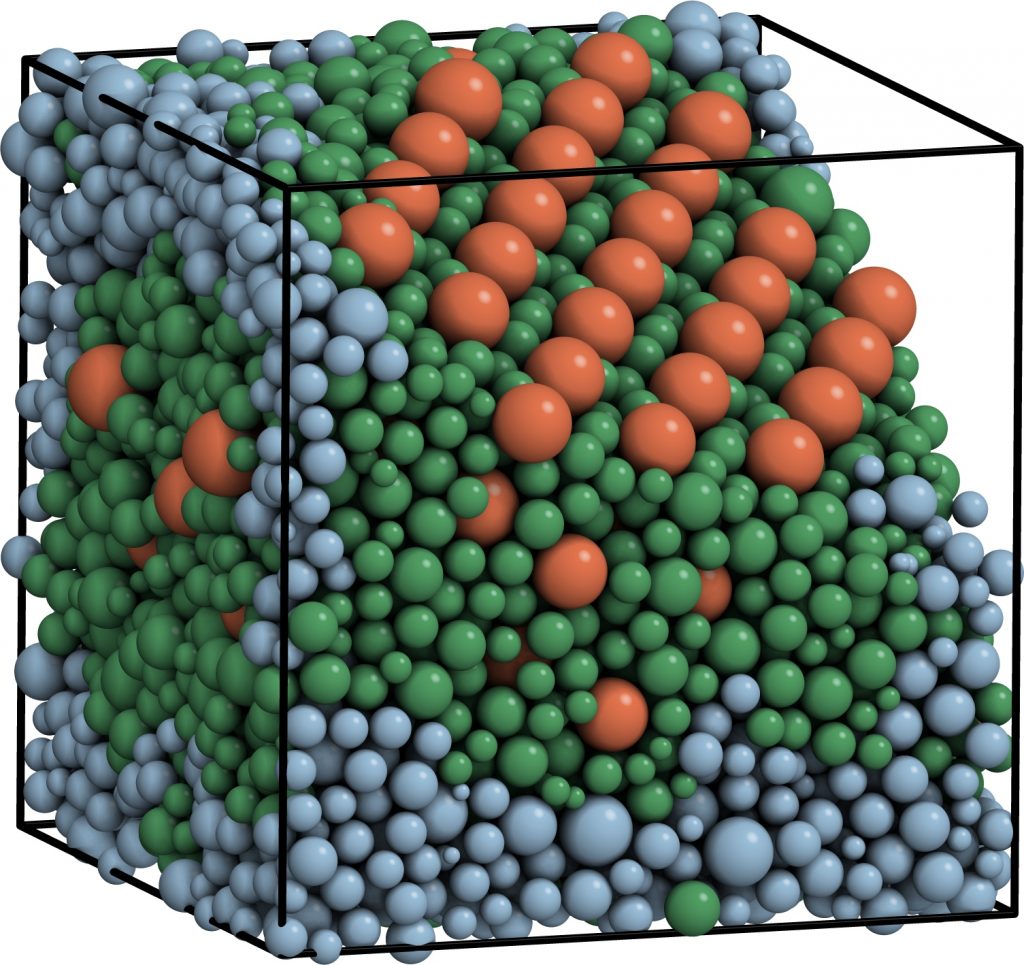 Nanocrystals can be prepared via chemical synthesis with highly uniform size and shape. They move by Brownian motion and are building blocks for self-assembly processes to create functional materials. Applications rely on the unique optical, magnetic, electronic, and catalytic properties of individual nanoparticles as well as their assemblies. We have developed geometric models and computational methods to derive and validate fundamental principles governing nanocrystal self-assembly. We investigate important design parameters such as the particle shape, anisotropic interactions, and the role of the assembly environment.

The interaction of atoms and soft colloids is frequently modeled using effective classical pair potentials. This allows studying their thermodynamics, phase behavior, and transport phenomena. Pair potentials with just one length scale are common models for many gases and simple fluids and well established, but complex fluids and crystallization into non-close-packed crystals require angular terms or multiple length scales. Important findings so far are the first computational self-assembly of an icosahedral quasicrystal and clathrates from molecular dynamics simulations.